Property owners along the north side of Interstate Highway 10 who suffered flooding due to highway barrier construction had a big win in federal court today. A federal Magistrate Judge recommended throwing out the State of Texas’s dismissal motion by ruling both that the plaintiffs had stated a claim for relief and that the State of Texas could be sued for those causes of action.

The decision recognizes that “to facilitate the use of IH-10’s eastbound lanes as an evacuation route during periods of flooding, the Texas Department of Transportation recently raised the elevation of IH-10, widened it from four to six lanes, and installed a 32-inch impenetrable, solid concrete traffic barrier on the highway’s centerline.” The State’s highway work is designed to keep the southern-most lanes clear. But it does so by flooding property for miles along the north of the highway. 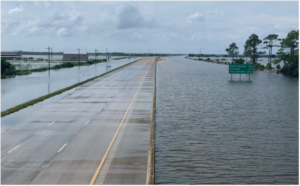 “There is no doubt in my mind that Plaintiffs have plausibly stated that the State’s use of [plaintiffs’] property was more than incidental, meaning that the State has no immunity from liability. Not only have Plaintiffs alleged that the State knew or was substantially certain that the concrete barrier would cause flooding on the northside of IH-10, . . . but they have also pointed to specific ways in which discovery might help them to prove those allegations at trial.”- Magistrate Judge Andrew M. Edison.

This ruling opens the door for plaintiffs’ case to move forward and continue through discovery and toward trial, which is currently scheduled for spring 2022.

“In his 25-page analysis, Magistrate Judge Edison agreed with plaintiffs and completely rejected the State’s attempt to evade liability for the damage these citizens suffered when the State used their property as a giant detention pond,” said Daniel Charest. “These facts present the classic takings case: the State used these plaintiffs’ properties for the benefit of the public in general. And both the Texas and U.S. Constitutions mandate they be compensated for their losses. Now that we have defeated the State’s arguments, we intend to drive these cases forward to trial and resolution for our plaintiffs.”

The case is Devillier, et al v. The State of Texas, Case NO. 3:20-cv-00223, in the United States District Court of the Southern District of Texas. A copy of Memorandum and Recommendation can be found HERE.

« Update on I-10 Flooding Lawsuits
Town Hall Meeting on Wednesday, March 24 at 5:30 pm at the Lilton Sonnier Memorial Arena »